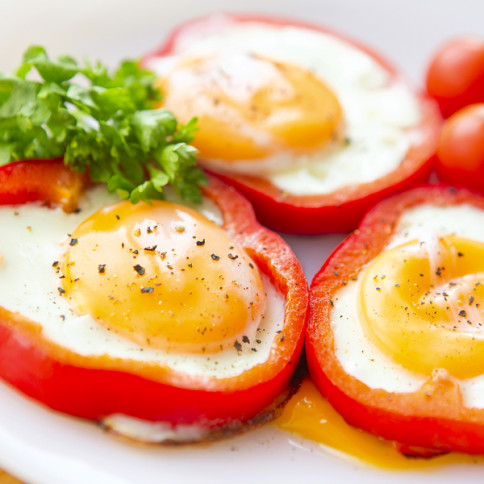 Ring Around An Egg 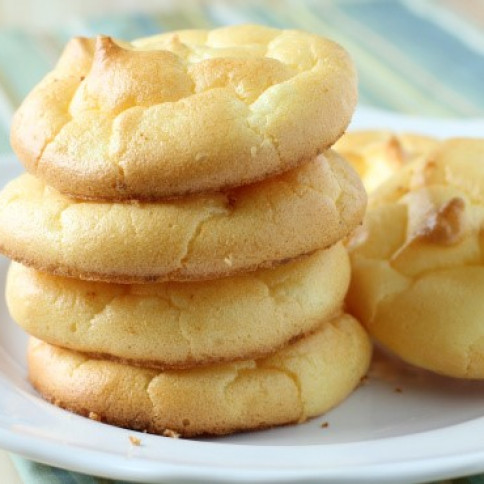 1. Preheat oven to 300 degrees.
2. Separate the eggs very carefully, there must be no yolk in the white.
3. In one bowl, mix together the egg yolks, the 3 T. of Cottage Cheese OR Cream Cheese and the one packet of Sweetener until smooth.
4. In the other bowl add 1/4 teaspoon of Cream of Tartar to the whites and beat the whites on high speed until they are fluffy and form nice peaks.
5. Very carefully fold the egg yolk mixture into the egg whites until mixed, but try and not break down the fluffiness of the egg whites too much.
6. Spray two cookie sheets with Pam or other fat-free cooking spray.
7. With a large spoon, "scoop" the mixture into 10 even rounds on the sheets (about the size of the top-half of the McDonalds hamburger bun; roughly 3/4 inch thick and 4 to 5 inches across).
8. Bake on the middle rack. Here is when you have to watch them, because the cooking time the same on any two batches. It is somewhere around 1/2 hour, but it could be less or more. You just need to watch them until them become nice and golden brown (again, the color of a McDonald’s bun).
9. Remove from the pans and cool on a rack or cutting board.
10. While warm they are crumbly and similar to cooked meringue - but don't let this fool you! Once completely cool, seal them in a Ziploc storage baggie or a Tupperware overnight. They will totally change their consistency, to something much more like bread - a softer texture that is nice and chewy. If you do not like softer chewy bread, then eat them as they are, nice and crisp.
11. Since the sides that were facing the pan are perfectly flat, you use these to spread things on, or make sandwiches, or even as a burger bun! The choice is up to you, and you will be quite amazed at how much like a bun these really are! 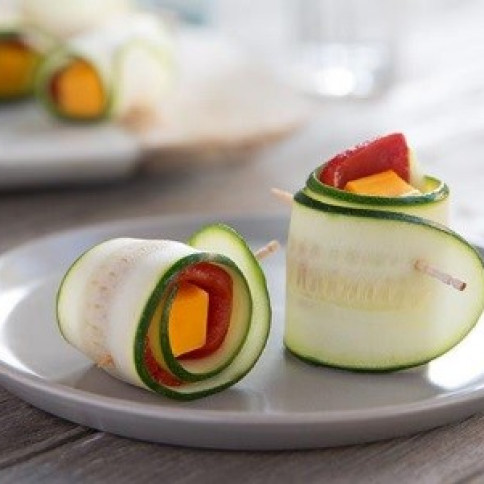 Directions:
Use vegetable peeler to cut each zucchini into 16 lengthwise slices. Cut putters into 32 strips, each about 1/2 inch wide. Top each zucchini strip with 1 each petter strip and cheese cube; roll up tightly. Secure with tootpicks. 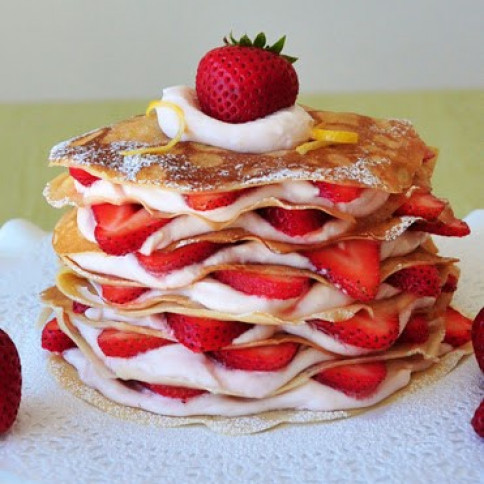 Use 3 tbsp. Batter for each crepe and a small, nonstick 6-inch crepe pan (inside diameter) - make sure you have a newish nonstick pan (i.e. it must still be nonstick. lol) - I have a couple of pans that I keep primarily for making crepes. Tilt pan to coat with batter. Cook over medium heat. Flip crepe when it is easy to slide a spatula underneath it. Cook a few seconds on the second side. Set aside in covered casserole dish and in the oven at a low heat of 190°F. Brush pan with a little olive oil between every other crepe or so. 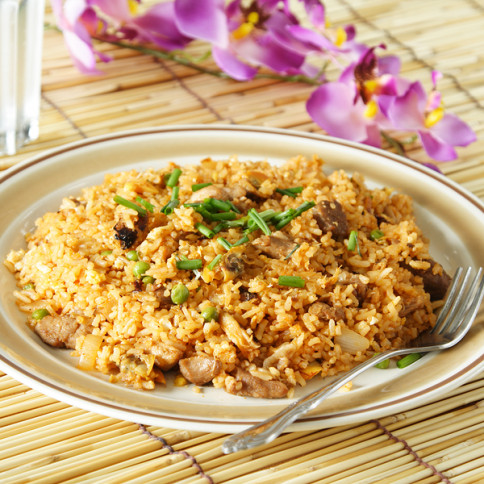 Directions:
In a Wok or large skillet, heat enough oil to cover the bottom. Fry minced garlic (or garlic powder) with finely diced white part of onions for approximately 1 minute. Add grated cauliflower and fry for 4-5 minutes, stirring constantly. Add soy, ginger, diced green onion tops and pre-cook cubed meat or shrimp. Stir well and brown a bit. Push mixture to one side of pan. Add oil if necessary and scramble eggs on empty side of pan. Stir eggs into “rice” mixture and remove from heat.

NOTE: For an additional 6 grams for the entire recipe, try 1/2 cup frozen peas (about 2 minutes after adding cauliflower). It adds great flavor and richness to the dish! 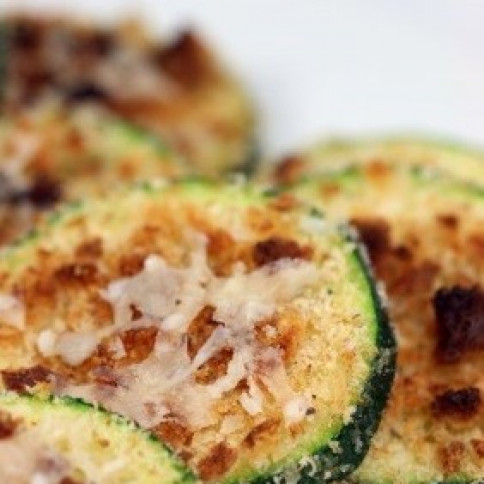 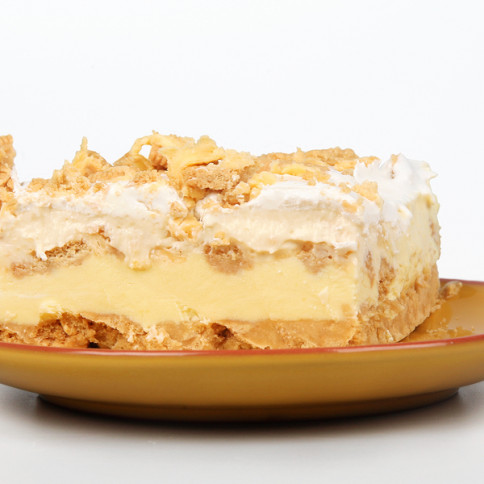 Dissolve Jell-O in boiling water. Add lemon juice and rind. Cool until “egg white” consistency. Cream together Splenda, vanilla and cream cheese. Add Jell-O and mix well. Fold in Cool Whip. Lay graham crackers in a pan and pour the mixture on top of the crackers. Crumble fat- free vanilla wafers or finely chopped pecans on top to garnish (Optional). Allow to set in fridge and chill for several hours before eating. 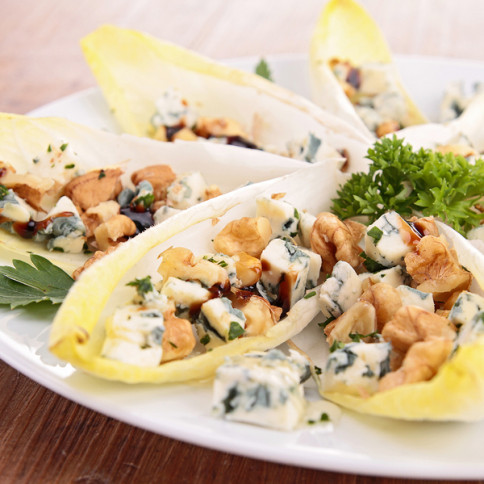 1. In a bowl, combine the blue cheese and sour cream, mashing together roughly with a fork.
2. Spread 1 1/2 teaspoons of the blue cheese mixture into each leaf.
3. Top with crumbled bacon and dried cranberries and serve.
Nutrition facts per serving:
105 calories, 6g protein, 5g carbohydrate, 7g fat (3.7g saturated), 2g fiber 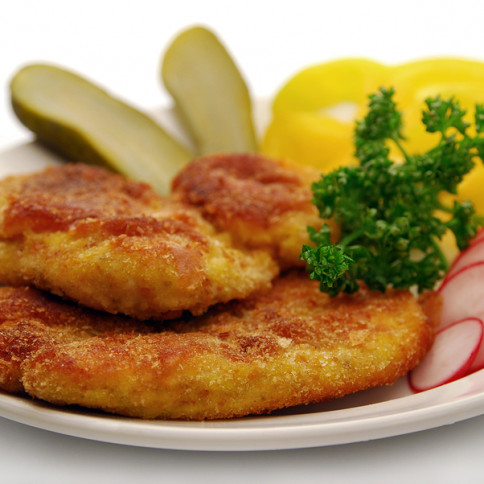 
Directions: Heat cast iron skillet with a small amount of olive oil until “hot”. Beat eggs will in a bowl. Process pork skins through food processor and add salt and pepper (or other spices to your taste) or place in a gallon zip bag and crush thoroughly with a rolling pin. Dip cube steak in beaten eggs, then roll in ground pork skins. Bake at 375 degrees turning over.

Now you have a fried food with added protein from the eggs and pork skins. Very little carb and sugar! 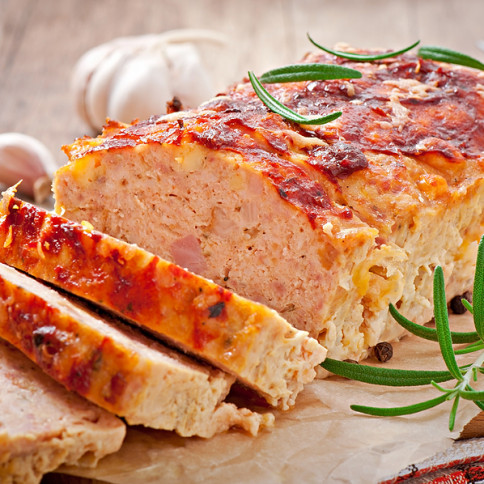 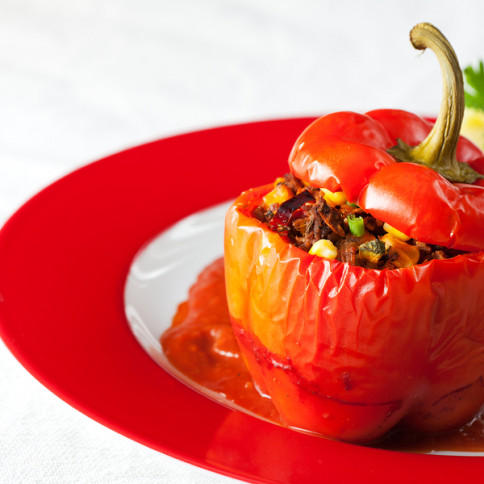 Directions:
Preheat oven to 375 degrees.
In large skillet cook sausage and ground turkey, drain. Add spices, onions and red pepper chopped.
Cook until vegies are soft. Clean out other peppers and stuff. Spray a baking dish and place peppers in dish. Put a Tbsp. of crushed pork rinds on top of each. Cover with foil and bake for 40-45 minutes. 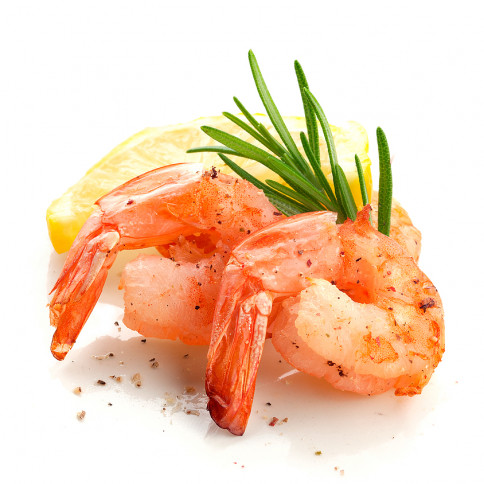 Directions:
In large skillet, sauté shrimp in oil for 3 minutes. Add the rest of ingredients. Sauté until shrimp turns pink.